And to think I was worried about getting fifty species in a year! Now I’m starting to think I underestimated the case! I may have a shot at 300 total this year! (I currently am in the mid-200s somewhere–thought I was over 300 already, but going back and tallying the spreadsheet shows I am lower than I thought.)

A sentiment I’ve heard occasionally–generally cheerfully uttered!–is that the extraordinary diversity in my garden is a result of either extreme good fortune, obsessive targeted gardening, or great location in the unspoiled woods. Or because it’s huge.

There was a study done in England a decade or so ago that looked at biodiversity of insect species in gardens, and what they found is that a bigger garden does have more species than a smaller garden, but not by as much as you’d think. If my garden is twice as big as yours, I will probably not have twice as many species, unless other factors are in play. Even quite a small patch of garden, and a water feature literally the size of a plastic window box, will bring in a vast array of species. (An older garden does have more species, interestingly, probably because trees and shrubs are a huge draw.)

As for location–well, species found on the edges of woodlands are different from those found in cities and suburbs, but not that much more numerous–and not, it should be said, noticeably more rare.  Being totally crazy on the native plant front, and having a lot of trees around helps, but the tree thing happens in a lot of cities too. (Hell, I got more bird species in the city than I ever do here, simply because I was an oasis there–the Central Park Effect writ very small.)

The only species that are probably going to be more numerous for me than someone in a suburb are the various amphibians and reptiles, which are plentiful locally and have a harder times in cities. But that’s a very small percentage of my species list.

The primary reason I’m sitting here cruising towards 300 resident species is because I’m the sort of obsessive individual who looks. That’s all. I am willing to go out at 10 at night and photograph the moths buzzing around the porch light (and then I go back in and turn the porch light off, so that they don’t get too fried.) All I’ve got that’s specialized is a pretty good cell-phone camera and a willingness to join ID sites like BugGuide.net and BAMONA.

(And a willingness to look like an idiot chasing bugs around. That last is pretty important. And yes, I still scream and duck when the moths fly for my face. I’m not actually that fond of bugs, I just think it’s important to know what they are.)

So if you’re wondering if your postage stamp sized yard is enough to make any kind of difference and feeling discouraged–believe me, it can and you will. You may have to be cleverer about it than I am–I have the luxury of space–but that’s honestly not hard. I am enthusiastic, but often not bright.

A frog! Woo! This is actually a pretty common species, and we’ve probably had them for ages, but this is the first year they’ve been calling separate from the chorus frogs and I’ve felt confident in the call ID, so I’m counting it here. 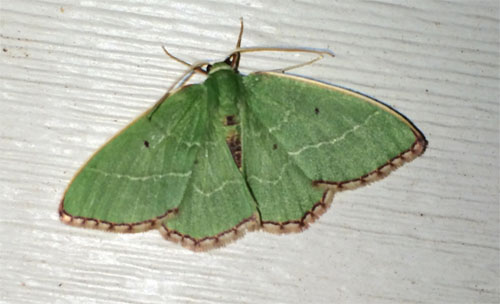 Originally thought this was a Red-Bordered Emerald, but the red spots on the body are apparently the tell. This makes him a lot more obscure. (And by obscure I mean “There are two sightings on the BAMONA website, and I’m one of them.) He feeds on sweetgum leaves.

Another obscure one, and also a pretty uninteresting little insect, I must say.

These are swarming my porchlight in vast numbers at the moment. They’re a weirdly tall moth–they stand up away from the wall instead of lying flat.

One gets the impression that they ran out of clever names at this point.

This one looks a lot like a bird dropping. It feeds on ash leaves.

There is no common name for this species and not many sighting reports. The Eupithecia clan all look alike, and trying to tell them apart is tricky. A good many of my sightings get rejected as “Eupithecia, but can’t tell which one from photo.” 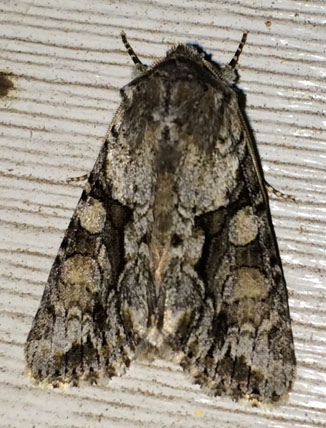 So it turns out that there are a kajillion different Quaker moths. Highlights include “Ruby” “Rustic” “Subdued” “Cynical” and “Intractable.” I love those last couple so very, very much.

Next week I am off to Texas and the 50 species goal will be on hold–but hey, at least this is getting me taking photos, even if I fell off the wagon on the Photo A Week thing!