By ursulav | Insects, Stuff In My Yard | One Comment 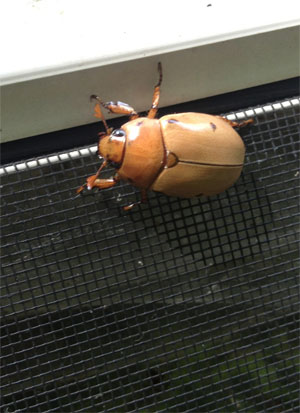 Snapped a photo of this tiny insect out in the garden. I’m kind of amazed the phone even got it. 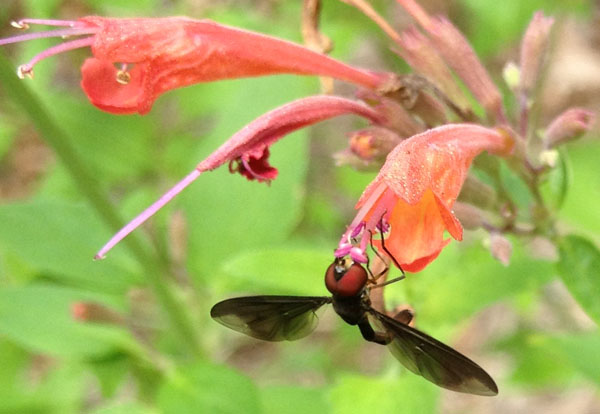 Probably Ocyptamus spp. Thanks to Beatriz Moisset for the ID!

Those flowers are the orange trumpets of an Agastache cultivar. The flower fly himself was only the size of my thumbnail and resembled the tiniest dragonfly you’ve ever seen.

As an adult, he feeds on nectar. His larvae (I am told this is a “he”) eat aphids, which means he’s more than welcome in any garden I ever grow. The Ocyptamus genus is huge, endemic to the New World, mostly neotropical, and now you know as much about them as I do.

Also saw my first Eastern Fence Lizard in the garden today, which is a new lizard for the yard list. He was very, very, very fast and I did not get any photos.

Spent an hour in the garden this morning before it got hot—the first serious gardening I’ve done in a month or so. Made a pretty good dent in some of the weeds, need (naturally) more mulch so I can just smother a chunk of the rest. The stiltgrass is still thugging.

The Weed Dragon flamethrower was amazingly effective on stiltgrass, though—the strip down the middle of the gravel drive, which was solid green, is now dead as a doornail. Only the plaintains resprouted from their roots. It’s been a week and some change and while there’s some regrowth, it’s barely a fraction of what it was, and more importantly, it’s not stiltgrass. Very pleased with it.

In the back, over the fence, where I cannot use a flamethrower for fear of setting the woods on fire, I have more or less screamed “THIS. IS. GAAAAAARDENNNNN!” and started throwing all the smartweed I pull up over the fence, on top of the stiltgrass. It roots instantly—you can’t keep a smartweed down—and is smothering out the stiltgrass. And it’s native, so I will endure it.

As much as I grumble about the weeds, I have to step back and say “Yeah, but it could be so much worse.” I have had spectacular luck with groundcovers in the back—the native St. John’s wort is an imperfect mat, but the green-and-gold “Eco-Lacquered Spider” has formed a wall-to-wall mat over the shadier area that keeps down the sheep sorrel (which is running rampant where there is no green-and-gold.) Eco-Lacquered Spider (and what a cultivar name, eh?) makes me nervous every spring with its rampaging stems, but it settles down in summer and becomes a well-behaved dark green carpet and I remember why I loved it in the first place. There is a whole stretch of garden where I don’t weed except occasionally and around the edges, and it looks fine. (Well, fine for my garden. Unruly and a bit ragged with weird-as-hell plant placements. I am still not sure how that Joe Pye Weed got under the oakleaf hydrangeas…)

And there has never been such a year for Tiger Swallowtails. I count over a dozen in the yard every day—most of them probably resident, but presumably there’s a few being changed out here and there. They are particularly fond of the starry rosinweed, a somewhat obscure member of the Silphium genus that produces masses of yellow daisy-like flowers…six feet off the ground. Not that you can see them, since they’re always covered in swallowtails.

I also finally got a Spicebush Swallowtail in the garden that I am reasonably certain grew up here, on one of the spicebushes. He is much too clean and perfect and new-looking to have been a long-distance wanderer. I am absurdly proud.

Our fledgling count is up to ten, with the addition of a young tufted titmouse. And one of the most spectacular developments—and one that apparently I can take some partial credit for—is a massive explosion of dragonflies. I have never seen so many blue dashers, and there are sundry other species as well. I assumed that they are here because the weeks of rain led to standing water led to more mosquitoes than anyone can deal with, led to a predator population explosion. And while that may be part of it—there are several dragonfly nymphs patrolling my rain barrels as we speak—according to some of my bug guide peeps, some of these species can take up to three years to mature.

And I think back three years ago, to a woman with a shovel grimly determined to dig that pond or die in the attempt, and the dragonfly mating flights around the pond that summer, and I think “Huh. I wonder…”

At the moment, the pond is home to many perching dragonflies, to a stand of Louisiana irises and dwarf horsetail, to many bronze frogs and hopefully still a single newt.

And someday I will finish the patio…though the swallowtails are puddling on the sand, and I will feel guilty about displacing them.

And for now, more mulch.

By ursulav | My Garden | 4 Comments 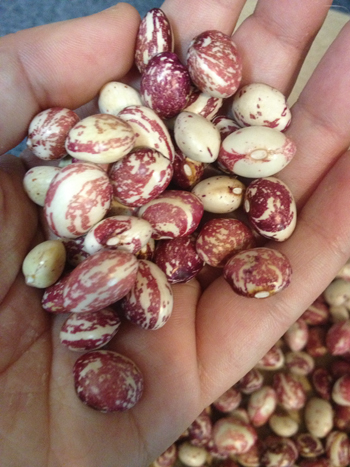