A few notes from the garden…

Guess what I found!? 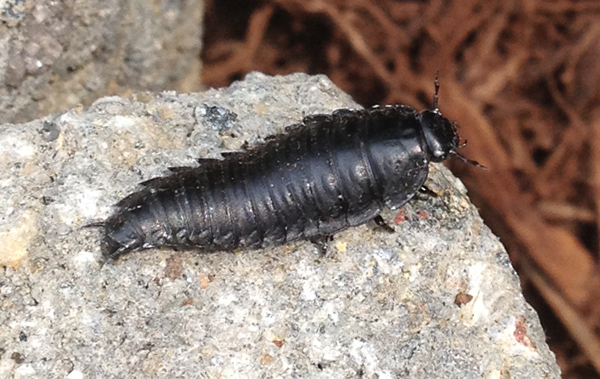 This peculiar devil is the larval form of the American Carrion Beetle! How cool is that? (They feed on mushrooms and dead bugs as well as rotting meat, so I hasten to assure you that I do not, in fact, have dead bodies rotting in the woods. At least, to the best of my knowledge.)

Spring sprung and was promptly batted aside by summer, so it’s hot and humid in the garden, and I am trying to stay ahead of the stiltgrass with copious amounts of mulch, because the flamethrower is questionable in a dry pine wood and would also take out all my nice jewelweed that has established so marvelously.  Thinking of trying to fight it by transplanting in Virginia knotweed, which is an aggressive loon of a plant, but native, attractive, and host to a couple of butterfly species. (I have the variegated form, “Painter’s Palette,” which comes true from seed and boy, is there a lot of seed!)

Other than that, everything is blooming, the pollinators are out in force, I had a Zebra Swallowtail show up the other day (an uncommon butterfly in this neck of the woods!) and the pond is full of frogs and predacious diving beetles. On the downside, the weird cold/hot/cold/hot weather sent most of the spring veggies straight to bolting, so I got no daikons, some very sad beets, and the tomatoes are already starting to come in. Lost a bunch of peppers, too. Sigh. But the cucumbers and squash are happy, and I am holding out hope that the peas will produce a batch before the heat exhausts them. (A lot of local farmers just gave up and plowed the peas under. Can’t blame ’em. This has been demented weather.)

Craw-Bob is still in residence. Haven’t gotten a good look at him, but we’ve got the night vision cameras and just need to get them working with the house network. Mostly he’s a flash of movement into the hole as I go by.

The Patio That Shall Not Be Named has been graveled, sanded, mortared, and now needs bricks. I’m traveling at the end of the week, but hold out hope of getting it done before June rolls around. (All productivity must be crammed into this month, because June is solid travel and July and August will be miserably hot.)

I had a bit of a wildlife mystery this morning. Was going out to feed the birds and found—there’s no other way to say it—a pile of viscera in the middle of the path. Somebody had left their guts in a neat pile on the ground.

Being me, I of course immediately poked them with a stick. Yup. That’s guts, all right.

For whatever weird reason, there were a bunch of dead earthworms in the pile as well.

I wracked my brain—had something vomited and lost guts and earthworms together? Was this some kind of weird version of an owl pellet?—until I realized that the earthworms were from INSIDE the guts. Our deceased gut-owner had been out eating earthworms, and had quite a solid meal, then something jumped him, eviscerated him, and presumably ate the tasty bits. (I would have thought the viscera WERE tasty bits, but apparently somebody was picky.)

My guess is that the victim was a large frog, but I’ve got no idea what the killer was. I tossed the remains out of dog range—hopefully either Craw-Bob or the carrion beetles will find it and start the clean-up process.

So that’s all the excitement around here at the moment. Guts! Bugs! Mulch! THRILLS! CHILLS! ETC!