So apparently the world is divided into two groups.

People who know that lawn crayfish exist, and people who go “WHAT THE HELL ARE YOU TALKING ABOUT?!”

Up until an hour ago, I belonged to the latter group.

And then I was idly raking leaves off some tender plants in the narrow, soggy flowerbed alongside the garage wall, and I happened to glance down into the burrow.

There was a crustacean claw in it.

Attached to a crustacean.

Apparently this is a thing in the South. 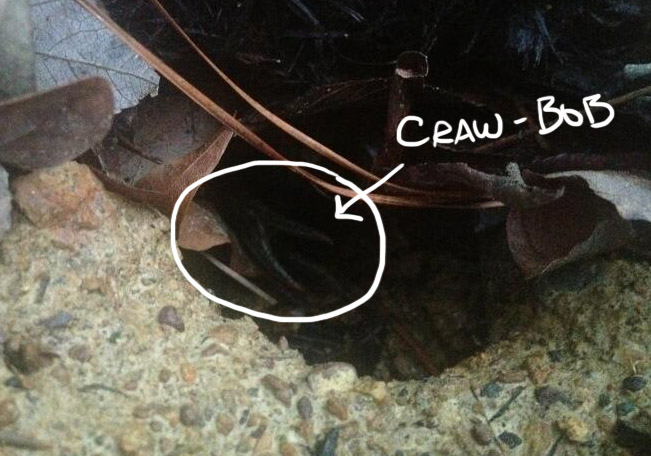 Well, what else was I going to name him?

I can’t tell the species. At a guess, it’s either a devil crayfish or a Greensboro burrowing crayfish, which are the two good color matches, or it’s one of a dozen crayfish that have no common names and not much in the way of photos but exist in lawns throughout the South. (It is not the common red crayfish, as he is murky gray-brown.)

I did what anybody does when they learn that an aquatic creature is living in their flowerbed–I went to Twitter screaming “HOW IS THIS MY LIFE!?!”

Several people informed me that yes. This is a thing that happens.

Everyone else on earth assumed I was drunk or insane or being an artist or engaging in some obscure form of collaborative fiction, possibly with Seanan McGuire. (Which would be awesome, don’t get me wrong, but no. The crayfish really exists.)

Some species, apparently, live in lawns. Anywhere with a high water table, say. And at night they come out and walk around the lawn.

There is a five-inch crayfish walking around my garden on ten legs right this minute while I’m typing.

Not gonna lie. That kinda squicks me out a little. I mean, I love animals well beyond the point of sanity and reason, but…dude, it is walking around out there. A freakin’ LOBSTER is WALKING in my garden.

(I poked a stick down the hole. It grabbed the stick. I pulled it partway out. It is a good five inches long. No, I’m not going to eat him.)

So. Um. South? Are you listening?

Nobody else knows you have burrowing crayfish.

This is not like having gophers or rats or pigeons. This is…like…NOBODY has lawn crayfish. Nobody in the rest of the country thinks this is a thing. You need to TELL people this is a thing. Preferably when they enter the state. There should be signs posted on the “Welcome to North Carolina” sign that says “BY THE WAY, WE HAVE LAWN CRAYFISH.”

It would be like having a tree octopus. Or squid that roost in the attic like bats. It is not a thing that the rest of the country is aware of. It is weird.

That said, I guess he’s been there for a year now, and he’s not hurting anything, near as I can tell. They appear to mostly cause cosmetic damage to lawns (which I don’t have) and they are also apparently nearly impossible to remove, and if this is a Greensboro burrowing crayfish, it’s a species of Special Concern that may actually be endangered except we don’ t know enough to get good data, so…well…

I guess I have a crayfish.

And this is my life.