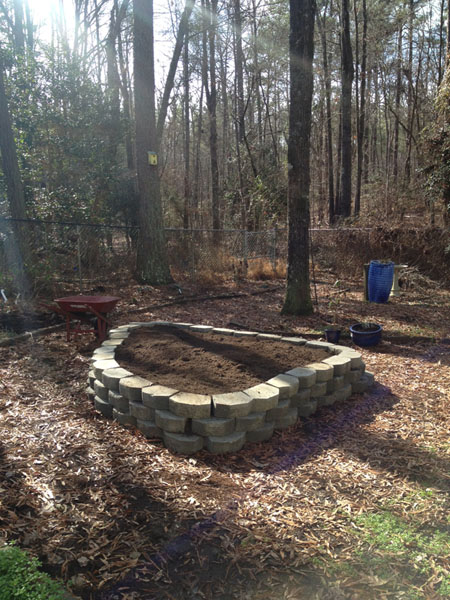 Made of eighty-five concrete drystone wall blocks (the kind with the little lip so that the top ones can’t slide off the one underneath in response to pressure from behind) and holding a little over a cubic yard of dirt. I did it all myself with my little red wheelbarrow and my little Pontiac Vibe. (Okay, the dirt was delivered, but I still had to truck it from the front yard in the wheelbarrow!) For those keeping track at home, that means I moved well over a ton of materials in the wheelbarrow, over the course of a week.

Stamina. I haz it.

It gets more or less full sun (more toward the front), but is in partial shade in the afternoon, which is actually what you want for veggies down here, since the afternoon heat is merciless. I don’t know if it’ll take tomatoes, but I plan to plant beans, carrots, daikons and beets to start, and maybe some lettuce is in the shadier bits around back. There are a couple of small gaps in the stone, mostly at the corners, owing to the wedge-shaped nature of the beast, and I’ll finally have a spot to tuck a few of those little species that all say “Try planting in the cracks of a drystone wall!” Well, HA! I finally have a drystone wall—sort of—and I WILL so THERE!*

It’s not as big as my main veggie bed that wraps around the deck, but it’s over a foot deep, which is amazing compared to the other beds. (A scant few inches of topsoil and compost over clay subsoil. We do not double dig here. We do not even single-dig. We break our shovels and burst into tears.)  I’m hopeful for the root vegetables this time—I’ve managed small beets in the other beds, and I’m trying Parisenne carrots there this year—but it’s so nice to finally have a space where I’m pretty confident I can do real, finicky, must-have-deep-loose-soil root vegetables.

The rest of the garden in this shot is not very attractive at the moment. Winter is visually much harsher down here. (I never realized how many sins snow hides.) Most of my efforts have been on the front yard, which has nice dried grasses and evergreen Carolina jessamine, but this patch is…rough. Oh, well. I will eventually get some evergreens back here to break up the monotony of dead oak leaves and to disguise the chain link fence, but frankly, there’s only so much you can do in such an aggressively deciduous climate.

*I may be retaining some small bitterness after all these years.