On the ninth day of Christmas, my true love gave to me… 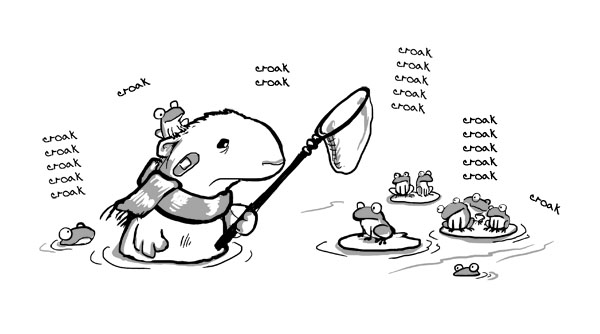 We have frogs here.

Most of the year we merely have a LOT of frogs. There is a stretch in spring, however, when the cricket frogs are hatching, where we have frogs in Biblical proportion, and I stop going out in the garden for a day or two because I will step on too many tiny amphibians.

The nine species so far found in the garden are Southern toads, Fowler’s toads, chorus frogs, the aforementioned cricket frogs (and don’t ask me if they’re Southern or Northern, because I am not a herpetologist.*) eastern pickerel frogs, bronze frogs, Gray’s tree frog, leopard frogs and spring peepers. (I have never actually seen a peeper, but boy, do we hear ’em. The real songsters, however, are the chorus frogs.)

Our pond is full primarily of bronze frogs, which are like small bullfrogs. Every now and then a leopard frog will come to the pond, but it’s primarily owned by bronze frogs, and they’re the ones who breed in it most enthusiastically.

The cricket frogs (who are teeny weeny little things) breed everywhere, but primarily in the drainage ditches and any standing puddles you may have lying around. Improving some of the garden’s standing water issues had to wait until the narrow window when they weren’t full of tadpoles—and we’ll see next year how successful I may have been there.

There are enough interesting frog facts to keep us here until the new year, so I won’t start in, except to say that having a frog pond is possibly the most fun I’ve had as a gardener.

*I’ve never even had a cold sore.