On the eighth day of Christmas, my true love gave to me… 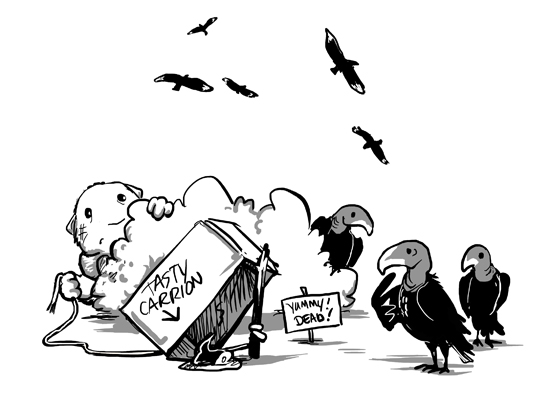 Black vultures, Coragyps atratus, are native to my neck of the woods, with a range extending over most South America. We have tons of turkey vultures as well, but I had never encountered black vultures until I moved to North Carolina.

You can ID a black vulture quite easily in flight, as they have a different shape than turkey vultures and a large pale crescent at the end of each wing. They are—for vultures—quite charming. Most of the rehabbers I’ve talked to say that vultures rapidly become their favorite birds to work with, as they’re intensely social and capable of great affection. Black vultures usually live in family groups and you’ll often see the whole clan going after a roadkilled deer.

We had one—Vulture-Bob—perch on our house for a few days. Because we are terrible suckers, we worried that he might be hungry, but drew the line at setting out carrion. (We were also rather worried he’d vomit on the dog, this being their primary method of self-defense.) He left a few days later, but every few months, he—or someone like him—appears in the woods around the yard again, checking to make sure we have not died. So far we have not obliged.

Both Kevin and I now cannot pass a flock on the roadside without calling out “Hi, fellas!”  When I was driving across the southern US this last time, I didn’t start to feel like I was getting near home until I saw a black vulture (which wasn’t until somewhere around Mississippi.)

Yes, this is a weird thing to fixate on. I’m a birder. We do that.