On the third day of Christmas, my true love gave to me 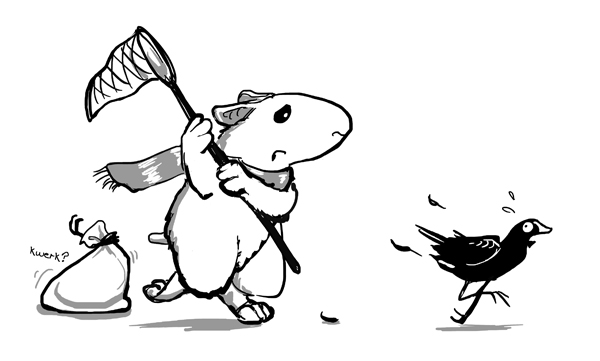 Technically our hamster is behind the times, since the American form of the moorhen is now known as the common gallinule. But he’s trying very hard.

Moorhens (or in our case, gallinules) are a type of rail. Around here, the American coot is the more common rail, but we do get the occasional moorhen too. (Given that this is black and white, the bird there looks more like a coot anyway, since they have white bills, and moorhens had red bills, but we’ll go with it.)

Alert readers may note that I once nearly killed a man over the difference.

I do not have enough wetland here to attract either coots or gallinules (and would be very surprised if they were to show up in the frog pond) but if you go about two miles towards town, there’s a very nice little lakelet that gets the occasional rail visitor. And a coot showed up at my friends’ place down the road. The theory is that it was exhausted and saw their ducks and thought “Flock! It’s a flock!” and landed with them. The coot was fine after a few days of recuperation, but my friend Marq said that it took the poor bird the length of a field to get airborne. Rails are shy, graceful beasts among the reeds. In flight, they’re…somewhat less graceful.

Our American form of this species is not endangered, not threatened, and not apparently in decline. There is a Hawaiian subspecies that’s probably in trouble, by virtue of being a native bird in Hawaii. It’s called the ‘alae ‘ula, and supposedly in legend is the bird that brought fire from the gods to the people. Which is really quite lovely, particularly compared to comparable Greek myths involving people’s livers.