On the second day of Christmas, my true love gave to me… 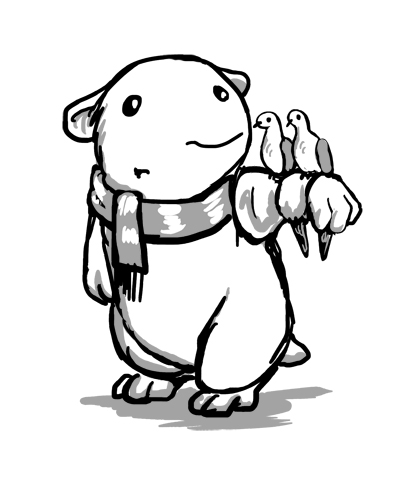 And a replacement for a Bradford pear tree!

Ah, mourning doves, better known to birders as “mo-dos” (generally uttered in a tone of mild disgust–“Is that a—?” “Nope, mo-do.”)

These birds are, to put it in the most flattering possible light, dumber than a wet brick. They have those tiny little heads, and you know there’s not much room for brains in there. Most animals that aren’t very bright, you can say things like “They’re very intelligent about things that matter to ____.” I have heard people say this about owls, who are mostly eyeballs, and sheep who are…sheep.

Nobody tries to say this about mourning doves. They possess a kind of elemental stupidity.

They are also incredibly numerous, despite laying eggs in the worst possible fashion (one nested in my mulch pile, there’s another in the rain gutter where it undoubtedly lost the eggs to cold water) with an estimated 350 million in North America. So they’re doing something right. There are two pairs who live pretty much in my garden—occasionally they wander off somewhere else for a few hours, but they spend the better part of most days here. Unlike other birds, I have never felt a need to name them, as none of them are particularly distinctive. They are the Dove Collective. They coo, they attack each other, they freak out and do a kind of aerial waddle into the trees. I hold them in a sort of good-natured contempt 99% of the time, and the time one turned up dead on the mulch pile, I lost my mind and vowed to hunt the killer to the ends of the earth.  (Hey, I’m complicated. And it hasn’t happened again, now has it?)

The two pairs that actually live here year round stay all winter but they raise two or three babies a year. (I’m assuming, since they’re like pigeons in that regard—one day there’s just an extra apparently full-grown dove in the yard.)  So we go up to six or seven during the summer. Then they clear out at some point.

Apparently there were plans for awhile to try to clone the passenger pigeon using modo stock, but as it turns out, passengers were more closely related to the band-tailed pigeon. And while looking up stuff, I discovered that the oldest known morning dove was 31 years old. Holy mackerel.