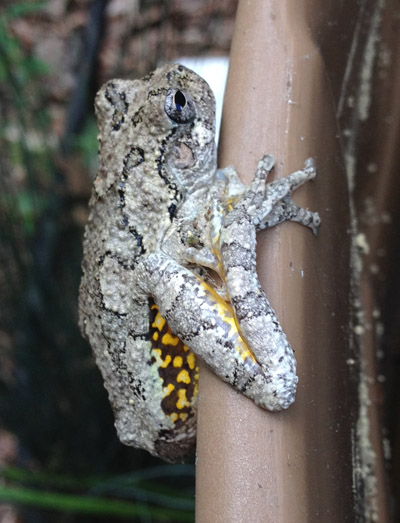 This handsome fellow was hanging out on my water barrel. This is the same water barrel that is inexplicably full of tadpoles. There are Many Fewer Tadpoles Now.

I have a suspicion that he might be involved. But that’s okay. At least the tadpoles are being useful. (I have transferred as many to the pond as possible, but the remaining few are avoiding the Official Tadpole Transferring Pitcher.*) The alternative is that they expire in the water barrel or somehow grow to froghood on a near-nonexistant food supply, and I was feeling kinda guilty about them.

The gray tree frog seems to think that a water barrel is THE place to hang out during a hot day, since it’s damp and shady, so I’ve been leaving the top cracked for him to get in and out.

*I am not allowed to use it in the house anymore.