Me and My Mulch

Mulch is very important in the garden. It is what keeps your garden from turning into a massive field of stuff you don’t want. Mulch is the stuff you put down around and between your plants to suppress weed growth, keep moisture in, keep the soil an even temperature, and generally makes the gardener’s life much easier. You want mulch. You like mulch. Mulch is your friend.

And I had put in this long bed in the backyard along the fence, because of a miscalculation with the number of edging bricks in a quarter-pallet-load. (There’s a lot. The Vibe can hold a LOT. They offered me the rest of the pallet because they didn’t want to unload it, and I got a discount, but then I kinda wound up having to put in another flower bed because I still had like sixty feet left over after finishing the vegetable bed. )

That may have been the first mistake. But I mean, it’s not like I wasn’t going to work on the backyard eventually ANYWAY…

So then I get the bright idea to get a load of mulch delivered. I don’t want to drag all those bags of mulch back and forth in the car, and it’ll totally be cheaper to have it delivered, right? Right!

So I went and ordered 5 cubic yards of mulch to be delivered from a little local landscaping place called Poultry Villa. I had no idea how large an area I was covering—tape measures vanish into this house like a black hole, I swear to god, someday I’ll pry up the floorboards and there will be fifty tape measures in a breeding tangle somewhere—but it was like…um…a bunch.

Have I mentioned I’m not good with spatial measurements? I’m not.  Kevin can testify about this at great length, with hardly any provocation at all.

“Are you sure that’s all you need?” asked the man at the mulch place.

“Errr,” I said. 5 had seemed like a lot, but then again, I ALWAYS underestimate everything—except the edging pavers that time—and I had used lots of mulch on the front yard last fall, so…

“Better make it 7,” I said, and went home feeling that I had done a responsible thing that would keep me from running out of stuff mid-project.

FUN FACT: It takes a dumptruck to carry seven cubic yards of mulch.

The dumptruck pulled up Thursday morning, dumped my load of double-milled reddish tree slurry on the sideyard (covering over a prairie dropseed, a little bluestem, and the rattlesnake master) and drove away, leaving me with a pile approximately as tall as I was and a whole helluva lot wider. 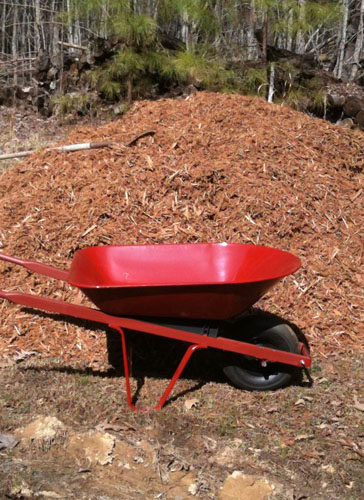 It's hard to tell scale, I realize, but that pile is about five feet tall.

My first task was to excavate out the rattlesnake master and the prairie dropseed, which I did. (The little bluestem may be a loss.) Then I embarked on a mad weeding-and-edging of the foundation planting along the front walk, which I had needed to do for a couple of months, took out a wheelbarrow load of chickweed and other miscreants, and then I mulched hell outta that.

Made no dent whatsoever in the mulch.

I threw myself into the backyard bed that I had bought the mulch for in the first place, and I am pleased to announce that after two days of manual labor, I have successfully mulched the entire thing.

This has reduced the pile of mulch by perhaps 20%.

I guess I could…err…well, I’ve got the other side of the foundation planting, that’s…um…maybe another five or six wheelbarrow loads, and I should really mulch the prairie planting, and…uh…I mean, I hadn’t planned to build that one bed in the backyard for, oh, three or four years yet…but the mulch is here NOW…

I think I need to buy a pitchfork. The shovel is really not optimal for this stuff. It’s awfully stringy.  (“Oh, good,” said Kevin, “you can put out both eyes. And pierce your ears. Simultaneously.” “I’ll be like a fashion-forward Oedipus!” I said.)

I have a vague dream that by summer, I will have conquered Mt. Mulch. I will probably also have landscaped the backyard a heckuva lot faster than I ever intended, and mulched things that I had never really planned TO mulch, but…well…

Mistakes were made. Mistakes!