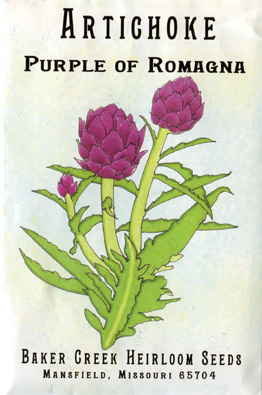 So I ordered a half-dozen vegetable seeds last fall, in my ongoing quest to actually do a little vegetable gardening.

The vast majority are peas and cucumbers (for pickling) and thus are to be sown directly into the dirt once the soil warms up, thus giving me a month or two to actually get the beds good and constructed. One needs a bit of edging and a load of mulch, and the main veggie bed needs to be expanded significantly, and probably the one hugel-bed that has the raspberry and the serviceberries should get edged too, which should keep me plenty busy with lugging and fiddling around at least through April.

The artichokes, however, need to be started indoors a whopping TWO TO THREE MONTHS before the last frost. I have never started seeds indoors before, having A) a strict no-coddling policy towards plant life and B) an excessive number of cats. But the snapdragon seeds that Kevin’s youngest planted in a plastic pot and put on the windowsill over the sink have survived unmolested for the last month, which gives me hope.

Well. Last frost in my area is in mid-April. Two and a half months…good enough.  Also spring has me by the teeth now, despite the fact that it’s damn cold out and I know winter is going to come crashing back at any moment.  But I had to do SOMETHING.

So, I grabbed the little clay elephant pots that my buddy Otter got me, which are adorable but too small for most of the plants that I tend to favor. They’re perfect for starting a couple of seeds, though, and hopefully will be sturdy enough to resist flipping over if a cat pokes them.  Three artichoke seeds apiece, three little clay elephants…we’ll see how it goes.

If they survive, I’ll actually have to do all that hardening-off stuff. Eeep. If they die, I still have most of a packet of seeds–I’ll probably direct sow them and let ’em live or die on their own. This would mean I wouldn’t get artichokes this year, but possibly next year, since they’re perennials.

While I was at the store I picked up onion starts and asparagus bulbs. Asparagus are also perennials, and I have never grown them before.  They’re apparently easy to grow in North Carolina, but you shouldn’t harvest the first year. So we’re thinking long-term here! (Also, apparently you should plant at least ten “crowns” per family member. Assuming the kids have no interest in them, that still means I need to go get more asparagus. Hmm.)

I’m also hoping to actually get onions this year, since my problem is that I have no damn idea when to plant or when to harvest, and I’ve never quite figured it out, and now I’ve totally lost track of the first batch of onions, which I think died anyway. But this year I will actually make a note of where they are! And plant in early spring! And harvest in late summer! I CAN DO THIS!