By which I mean I have a guest post over at the nifty blog Beautiful Wildlife Garden, which is dedicated to gardening for wildlife. I was very flattered to be ask to guest post!

Year of the Titmouse

Some years you get cardinals, some years you get chickadees…this year has been a bumper crop of titmice. I get to reflect on this, because it’s “wintry mix” out there, that nasty combination of snow and sleet and freezing rain, which makes for lousy driving but great window birdwatching.  (I’m not entirely sure of the reason–I think it’s because it’s so nasty out that they come to the reliable food source, i.e. my feeders. Maybe not, because the big pileated was out too, and I don’t have anything that would tempt HIM.) 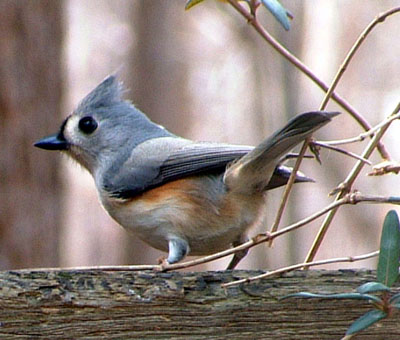 Don't you love my mascara?

It was a very light year for cardinals–normally they’re a reliable visitor, but I’d go for a month without seeing one recently. Today, however, there’s at least four out there, the females drab, the males what Kevin describes as “I’m red! Screw you!” which y’know, kinda says it all. And there’s a Pepperidge Farm assortment worth of sparrows, one lone winter goldfinch, and a whole lot of juncos, one of which is taking a bath in the puddles left by the ruts in the gravel driveway. (No, dude! It’s too cold! You’re gonna freeze your little butt-feathers off!) Even the blue jays that so rarely find their way out here are hopping through the tall pines and sipping from the puddles.

And titmice. A good dozen or more titmice. I know we had some breeding in one of the dead tree cavities, but I didn’t expect them ALL to stay! (They’re welcome, of course, but…I may need more birdseed!)

It’s not just the birds, either. I spent ten minutes watching a pair of beer-colored whitetail deer pick their way through the yard, mouth the anise tree, find it uninteresting, and finally plant themselves under the birdfeeder, to delicately lip up the spilled seed. It’s Cajun-style sunflower and safflower mix, supposed to be too hot for mammals, but as usual, that proves laughable.  (Really, you can’t win–either it’s so hot that you’re actually inciting afflicted squirrels to claw their eyes out or something equally wretched, or it’s merely a light condiment for the jaded rodent palate.) Eventually the deer wandered off, and now I should probably put my coat on and go put out some more suet or something because it’s quite a mob scene out there today.

When I was young, I used to read the garden catalogs. My mother and I went though them. It was a thing.

I still occasionally read garden catalogs, particularly when it is mid-winter and I am feelin’ blue, but I hardly ever use them now. Now I use the internet. I have ordered weird and random plants from the internet with great success–native prairie plants and chokecherry and serviceberry. Spring Garden sent me the plants I asked for, but they also sent me a bunch of other “bonus” stuff, which I put in the ground out of guilt, which is why I have Shasta daisies even though I don’t WANT Shasta daisies, and I had French lavender for a year and then it expired in the cold because you can’t grow French lavender around here. I hate that.

ANYWAY. I am experimenting with vegetables this year. My front yard has been landscaped to hell and back, and now needs time to grow, the nanoprairie gets another two years before anything happens (and if nothing happens that third year, I will terrace it, replant, and cry a lot)  so it’s time to work on the back. The back gets vegetables and some native plants to draw in the pollinators. (Fortunately I have some spare natives from the front yard that can be transplanted.)

Therefore, I have ordered vegetables.

I have limited myself to six packets, since I will pick up some tomato and broccoli and herb starts locally.  I have three cucumbers of various varieties–one a classic Parisian pickling gherkin, one a tiny Mexican cucumber that fruits in fall and tastes a bit lemony, and one rare Armenian variety called “painted serpent” which they recommend you pick before it gets eighteen inches long and which I have absolutely no earthly use for.

Kevin wanted to make pickles. Kevin will get to make Very Large Pickles.

I have also acquired artichokes, a perennial which can overwinter here in the South, Dragon Tongue beans, and a classic garden pea called “Wando” that does well in the south.

I am not too worried about the Over Produce Problem yet, because these are seeds and I have terrible luck with seeds, of course.  So I will start half of these in seed starter and we’ll see how it goes. I have a bed picked out for the climbing stuff that needs to be heavily mulched over come spring–it’s against the house, and I’m going to stick trellises up it, since that’s a fiendishly sunny spot, and I hope to provide a smidgeon of shade to the house.  I also plan to expand the current veggie bed to nearly double its current size (which isn’t all that much, since it’s wee at the moment.) We’ll see how my hugelkultur bed does–I suspect that the raspberry and serviceberry will happily grow to fill the spaces allotted them, but should either fail to thrive, I have replacements.

And now I will not buy any more seeds. Because seeds are too cheap and plentiful and have too fascinating of descriptions, and that way lies horrible danger.