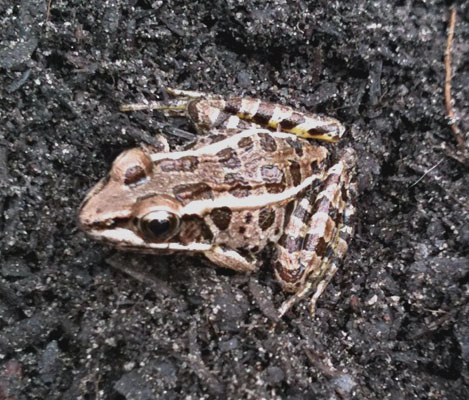 Well, look at you!

This handsome little fellow hopped out from under one of my bags of topsoil, and I managed to snap a few photos. (He was happy to just hang out on the dirt for awhile, perhaps hoping that I would go away.) I believe he’s a pickerel frog–he’s a little bigger than a quarter, and has squarer spots than a leopard frog. According to the internet, he eats a whole bunch of different bugs, and we’re at the southern end of his range. Happily, his species is not suffering serious declines at the moment, unlike the majority of amphibians, so as long as I keep bringing in the bugs and don’t slather pesticides around, Pickerel Bob should be a common visitor to the yard.