Crawling back to life…

I appear to have pulled through the Martian Death Plague, thanks to a diet of tea and hot and sour soup.  I’m still running at maybe 80%, but that’s enough to get me up and in the garden and then to work on Ghostbreath rewrites. (I must be healthy. The state of household clutter is offending me, and Ben has decided I no longer need a 24-hour feline escort and he can go back to making sure no ninjas take over the bed.) 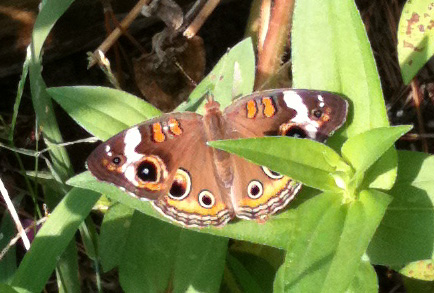 My trip to Da U.P. went well. My folks have a nifty little garden there, although the infinitely shorter growing season is telling–theirs looks like a garden, mine looks like a jungle. (Of course, some of that is planting thickness, too…) But they have a truly lovely and very arty garden, full of sculpture and monarch butterflies. I am envious.

Also, I saw a fisher. It looked like a black raccoon. I don’t think I’m gonna get one of those in the garden, regardless of how many native plants I put in, although my buddy Eve suggested a porcupine-on-a-stick feeder as a possible attractant.

Meanwhile, my garden kept on keepin’ on in my absence. I went out this morning for some watering and general poking around, and saw that the milkweed assassin bugs are mating and there’s another bizarre yellow-and-lumpy assassin bug on the vervain. (My yard is Assassin Central. It’s a good thing, but since the guides on-line inform me that the gardener is likely to see only one or two a year, I am bemused.)  Saw my first Common Buckeye flitting around, and there’s a spicebush swallowtail lurking on the back deck that I hope means caterpillars for my potted spicebush.  The milkweed has been eaten down by aphids, the pink turtlehead bloomed and was promptly chewed on by something, and my Tennessee coneflowers all died. That’ll teach me to get plants on clearance…

Generally, however, the garden is good–scruffy, overgrown, not at all tidy, starting to die back in places from the heat, but definitely alive and well.