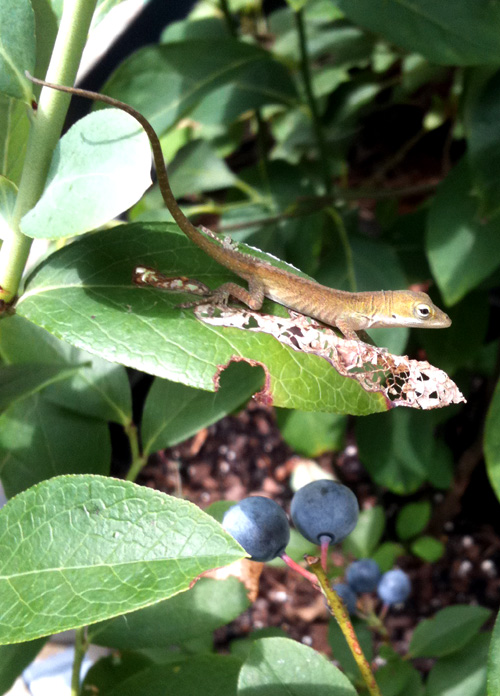 I am really likin' the iPhone for these quick nature shots. I'd never have gotten my good camera out in time to capture this guy.

Carolina anole! This is the smallest one I’ve ever seen–he was barely an inch long without his tail, and every single one of his little ribs was visible.  (For a sense of scale, those are blueberries. Small blueberries.) He was hanging out in the potted spicebush on the back deck, and I was actually checking for caterpillars when I saw him. I suspect he must have hatched fairly recently–we’ve been seeing all these little tiny anoles and five-lined skinks this year, more than Kevin says he’s ever seen, so my tentative guess is that the garden brings bugs which brought lizards which reproduced this year.

This one might even have come from an egg laid in the potted plants–apparently momma anoles are not terribly concerned about where they drop their clutch, as long as the soil is soft. (Which, come to think of it, might be the REAL reason we’ve got all these young ones–it’s pretty much hard clay subsoil everywhere except where I’ve put in the garden beds, so maybe it’s not a matter of food but of nest space…)