Never let the weeds get higher than the garden…

…as Tom Waits sang, and if you don’t own a copy of “Mule Variations” or at least the song “Get Behind The Mule” hie thee to iTunes at once.

It’s finally been cool enough these last few days to do some gardening. Saturday was a rough morning here in the House of Squash, so I did what grumpy gardeners have done since time immemorial–I stomped out to the garden and did some savage weeding.  The corner of the bed that had been taken over by bermudagrass and millet is once again safe for democracy, or at least lavender. Later cool days allowed me to finish the foundation planting at last.

Frankly, the garden’s less than spectacular at the moment—I am very fond of it, but in the manner of a parent who thinks their child is beautiful even when it has chicken pox and is screaming its head off. Everything went dormant in the heat and then we got two days of torrential rain, whereupon everything grew six inches and fell over. The swamp sunflowers are laying across the black-eyed susans, the zinnias are making a break across the lawn, and the whorled milkweed got eaten down by the woodchuck again.

I am keeping a list of plants that I need to stake next year. This list has grown long enough that it may require staking itself. 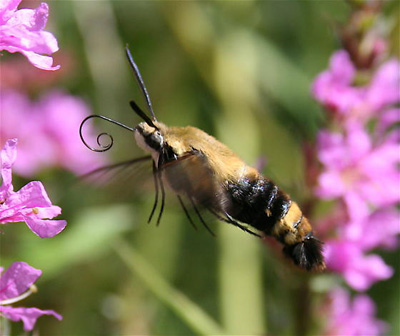 Photo by Cody Hough, college student and photographer in the Michgian area, from Wikimedia Commons

The wildlife, however, has no qualms about the untidiness of the garden and continue to visit. The sprawling mass of hummingbird mint supports no less than three hummingbirds, none of whom can stand the sight of each other. (And all female, oddly enough. Haven’t seen a single male.)  Orange hummingbird mint–a type of hyssop–is native to the Southwest and Mexico, so I plant it with a twinge of guilt–nectar is cheap! I should use natives!–but it’s absolutely hands down the best hummingbird plant I’ve ever found.  It also attracts snowberry clearwing moths, so I feel a little better about it, and it’s related to giant blue hyssop, which IS native, so…y’know.  (The hummingbirds can’t stand the clearwings either. Or large bees. Or butterflies. Or anything in their airspace. Hummingbirds are jerks.)