Yellow-Billed Cuckoo in the Garden! 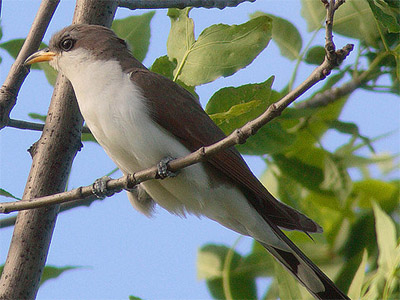 Photo by Factumquintus from Wikimedia Commons

Kevin and I were sitting on the front deck, enjoying a cup of coffee and watching the hummingbird cavort in the garden (a single female that seems to have staked out our yard as her turf) when I spotted something odd in the pin oak on the side of the yard.

It was a terrible way to try to view a bird, and all I caught were flashes of white belly and a black barred tail. Then it transferred to another tree, and while it paused for a half second on the branch before launching, I got a glimpse of a yellow bill and a brown back with thick reddish stripes where the wings would fall. (Then it was gone, and it had been such a hard spot that I wasn’t able to point it out to poor Kevin.)

“I think it’s a cuckoo,” I told Kevin, grabbing my field guide. And I was correct–as you can probably guess from the title of the post, it was a yellow-billed cuckoo.

The odd bit about this is that I’ve never seen any kind of cuckoo before, nor have I spent any time studying the fieldmarks of cuckoo-kind. It’s not like a finch or flycatcher, where there are tons and if you know one, you can at least guess whether something belongs in that family. Nor is this the first time I’ve had that experience of IDing a bird correctly on a guess. Apparently I have been birding long enough, have thumbed my Sibley into such dog-eared familiarity trying to narrow down IDs, that I picked up the general fieldmarks on a couple of the birds by osmosis. (Usually it’s the birds that look similar to something else I’ve spotted–look up enough thrushes and thrashers, you get familiar with the cuckoo.) Which is awesome…I just wish it worked more reliably! (Or with the call-notes. I have no memory for auditory things at all. I’ve tried studying calls, and I can’t retain a damn one for more than thirty seconds.)