Ding-Dong, the Hedge is Dead…

Armed with a bow saw and enthusiasm, I finally took out the last of the out-of-control boxwood foundation planting today.

You can actually see the house again! It is not a wall of shove-you-off-the-walkway pointy death! And the porch is open, and you can see the whole yard from it, and there are breezes! Breezes! The porch is full shade already, so the boxwoods just made it dark and still.

We’re not going to leave the foundation naked–I am not offended by the sight of bare brick, but hey, that’s a space! I could stick a plant there!–but we are going with the rather less aggressive native inkberry holly.  The newcomers look very spindly in their little pots compared to the ten-year-old boxwoods I just murdered, but given time, I have faith they will make a nice little planting. I’m also flanking the stairs with Carolina allspice, which is a fast growing native deciduous shrub. This would not be ideal for something to flank the stairs except that by all accounts, it smells heavenly in the evening. I’m willing to do some trimming on a hardy aromatic.  Next spring, I will line the sunny edge of the walkway with something sturdy, attractive and pollinator happy–Walker’s Low catmint, maybe, or a native of similar habit.

I would post  photos of the newly revealed porch (and the pile of boxwood…I could hugelkultur the WORLD…) but the ground is kind’ve a mess. Ten years of hedge means ten years of things being set on the railing, and then falling off the railing behind the boxwoods where nobody can get at them.  So there’s a fair amount of soda cans, and a whole bunch of half-empty bug spray bottles…and the prior gardener, true to form, seemed to think that the proper disposal method for hanging plants on the porch that had passed the blooming season was to unhook the plastic pot and drop it down behind the hedge. There are six such pots there. As there is only one hook upon which to hang such things, this would seem to indicate a disposal method spanning several years.

Mind you, this is the same woman who cleaned her purses by removing her wallet and throwing the still-full purse into a closet, so I shouldn’t expect much. There comes a point where it’s no longer “being a slob” and becomes some kind of pathology, and you stop doing anything but sighing and getting a garbage bag.

Meanwhile, have some black-eyed susans! 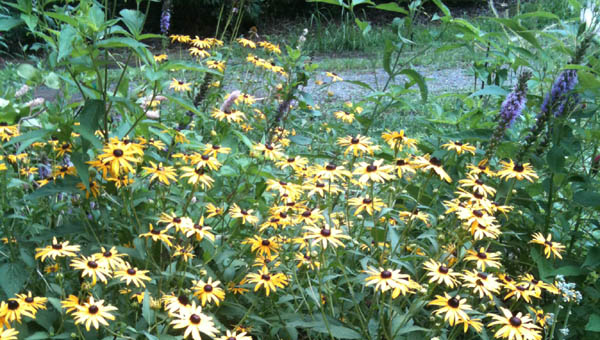 Photography does not do justice to the intense gold these things glow in full sun. I think this is the cultivar "Goldsturm" but not sure.