I don’t know if I get any gamer points for that–maybe we need gardener points!–but my bronze fennel is now host to five large black swallowtail caterpillars. 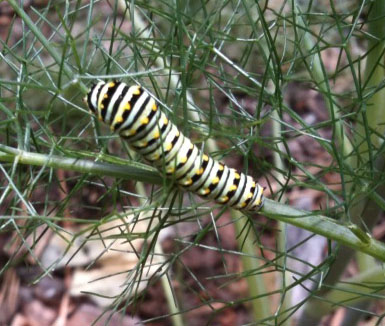 I kinda hope there’s enough fennel to support them, and that they don’t eat it down to nubs, turn to cannibalism, and then starve, as is apparently the methodology of caterpillars. (If they strip the plant completely, I’ll ferry them out to the dill and the Queen Anne’s Lace.)  They appeared practically overnight–there were a pair of instar larvae (the stage before this one) two days ago, and today there’s a fat munching horde.

This makes me very happy.  Sure, they’re not a remotely endangered species or anything, sure it’s only a handful of caterpillars, but they wouldn’t have been able to host here before, so I feel like our garden made an actual measurable difference, even if the measure is very small.

In less welcome bug news, I now spend about five minutes in the morning with gloves on, yanking Japanese beetles off that one mystery plant, and now off my zinnias.  Dropping them into a tupperware container full of water and Dr. Bronner’s Soap (It’s a mouthwash! It’s a birth control method! It’s a proselytizing tool for a completely incomprehensible religion! And it drowns beetles!) is not the most pleasant of occupations, but the flocks of starlings that are supposed to eat these suckers weren’t showing up, and my predatory bugs are apparently primarily good against larvae.  Which is fine for NEXT year, but they’re eating the zinnias now, so…Dr. Bronners it is.