A lot of garden-related work this weekend. Kevin mowed, which was good, but a rock flung out of the lawnmower shattered my back window, which was…less good. Fortunately I have a reasonable deductible, because the back window of a Vibe is a bloody expensive piece of work requiring multiple holes and windshield wiper bits. Eh, these things happen. 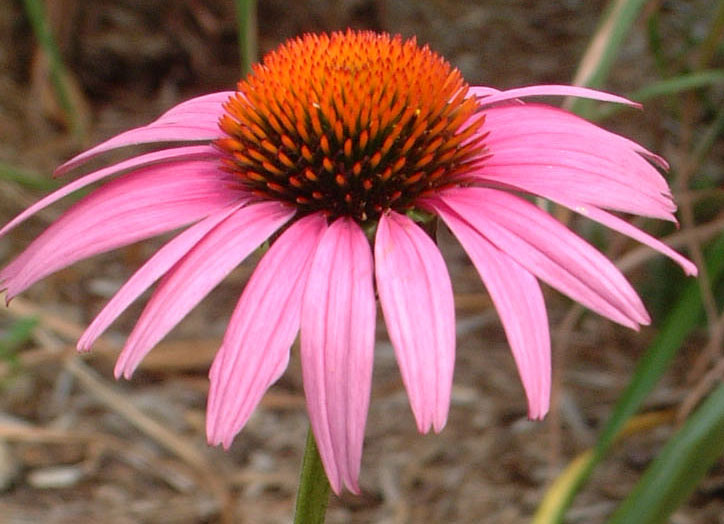 My coneflowers are flowering, at last!

We also killed the last of the silk trees on the property. (Yaaaaay! No more fifty million seedlings!) This was a big one and required Kevin and the bow saw, but it went down quickly.

I was delighted to have it gone, but in the “unintended consequences” division, the dappled shade area under it is now a part-sun area, much to the irritation of the jewelweed that I’d plunked under it. I’ve ordered a serviceberry online to replace it. This particular jewelweed may not survive the five or six years until the serviceberry is offering serviceable shade, but given that the other four or five jewelweeds are happy as little clams and they spread like wildfire, I doubt there’ll be much problem maintaining a population.

Yesterday, we harvested the first Roma tomatoes and handfuls of basil and made homemade caprese. Clearly, it’s summer. But I’m already contemplating fall, and the enormous bed I’m plonking in the front yard. Enough of this lawn foolishness! I’ve been reading about sheet mulching, and I’m gonna try that. Although I’ll need to get a whole bale of straw to provide enough organic matter…although I can start by chopping back some of the boxwood, whose days are numbered anyway…

Today, we made pickles. Well, Kevin did most of the work with the chopping and the recipes and the brine construction. I just washed things and harvested the dill, which is flowering in the garden as we speak. If these turn out delicious, we’ll have to plant more dill next year, and maybe even cucumbers. (Madness!) I had intended the dill as a host for any black swallowtails that might be in the mood, but I’ve only found one of the instar larvae, and it was on the red hot poker, so screw it, we’re makin’ pickles. (They’re probably all out in the grassy area at the end of the drive, on the Queen Anne’s Lace.)

Japanese beetles have appeared on one of my plants–a mystery plant that was labelled “Salvia greggi” but is nothing of the sort. I have been watching it suspiciously, waiting for it to flower and indicate what the heck it is. Today there were a dozen beetles having lots of disgusting beetle sex.  If I’ve been doing this whole ecological gardening thing right, there ought to be predators around to pick off the little buggers at some point. (This is actually the first Japanese beetles I’ve seen, so I’m getting off lightly compared to most other gardeners in North America.)  Otherwise, I could get out the gloves and the bucket of soapy water, but that involves not being lazy, and I prefer to expend my marginal energy on things like “digging the bloody frog pond” and “cutting back the boxwood.”

It would appear we’re about to get a storm again. This is what I get for watering yesterday…(The first time in three weeks! It poured a few hours later! It’s like a rain dance!)