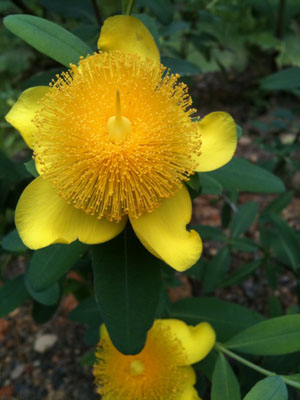 Despite the name, shrubby St. John’s wort is not the same as the stuff you get in bottles to treat the blues, nor the one that makes cows get weird sunburns. That’s a noxious weed. This, however, is a North American native, a compact, not-terribly-large shrub found throughout the east, although it’s currently endangered in New York and New Jersey. Clearly we need better nomenclature, because seriously–you want to grow this plant.

I planted this shrub on faith, as I plant many things, and I gotta say–this is one that abundantly rewarded me. The label said that pollinators liked it and that it was good food for the larvae of various hairstreak butterflies. That was good enough for me. I had no idea what the flowers would look like. I plunked it into the prairie planting, as one of the anchors on the end, and it’s been a low maintenance, tough little plant, drought tolerant, a good grower, and absolutely covered in these fascinating yellow flowers. Massively exceeded my expectations, can’t recommend this little guy enough.

The ones I’ve seen at the Botantical Gardens get maybe six or seven feet high, but those were really well established and even then were loose, open, not-very-large plants. Mine is about thigh-high at the moment–if it gets really huge, I’ll probably move it over a few feet, but it’s not giving indications of shooting up that high. Not a screening plant at all, but it’d be a perfectly good plant for the back of a bed, or the middle of an island bed, you could probably even grow other plants up through it. They like full sun, but I’ve seen them growing in part shade without any apparent ill-effects.

Haven’t seen any caterpillars hosting on it yes, but the pollinators are indeed attracted to it–I watched bumblebees rolling in the flowers like puppies on a freshly vacuumed carpet. Also, it’s deer-resistant. Does it get any better than this?