Plight of the Pollinators 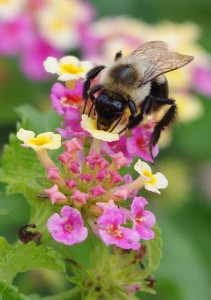 Have you seen me? Photo taken at the Raleigh Arboretum last year.

So I’m wandering around the garden lately, and noticing lots of interesting bugs. Thanks to the reader who sent me the pic of the robber fly–I saw one today! Eating a much smaller fly! And there’s a grasshopper nymph lurking on the sneezeweed and lots of the adorable little bee flies around and skippers and butterflies and gigantic dragonflies and wasps and little tiny flies and glossy ladybugs–an insect menagerie impossible to adequately catalog.

But one species is notable by its absence. They should be everywhere.

Where have all the bees gone?

As many of you probably know already, bee populations are crashing across North America (and in the Old World as well, if my quick googling is any indicator.) Colony collapse disorder, weird viruses, parasites…it’s a nasty mix. Some bee populations are down 70% or more.

This is bad. This is Very Very Bad. Pollinators make agriculture happen. Bees are the big pollinators, the heavy hitters, and without them, we’re in a world of pollination hurt, because no pollinators means we lose a whole lot of vegetables which means that farmers will have to hand-pollinate their crops, which will make any complaint you’ve heard about the price of food seem laughably antiquated.

They’re already bringing in stunt bees. We may yet see a day when those get hard to find.

I started getting concerned earlier this year–I mean, I’ve heard all about the bee problem, but I hadn’t really SEEN it. But the big bumblebees that should be all over the garden, the dominant bug in it, the ones that were here last year, are severely reduced. Some days I wouldn’t see a single one. Most days I’d only see a single one–usually poking her head into my Husker Red penstemon (and I hope to god that plant comes back next year, and if it does, I’ll buy five more, because the bees luuuuv it. Unfortunately penstemons seem to not-do-that-well in the South. Better gardeners than I claim it’s the combination of heat and humidity, and I have no reason to question that.)

Two showed up when my arrowwood viburnum flowered, and rolled around the big white flowerheads, getting coated in pale pollen. A few more arrived for the sundrops’ dramatic yellow bloom. As the season advanced, they began slowly to appear in greater numbers, attracted by the clover in the unmowed lawn (which has also given rise to blue-eyed grass and tiny violets.) But last year’s droning hordes are conspicuously absent.

And those are bumblebees.

I have seen one honeybee this year. One. It wasn’t in my yard–it was at the college where I walk occasionally, where they have multiple bee hives, and there was a single bee working on a bit of clover. If there has been a single honeybee in my yard, I have missed it, and believe me, I’ve been looking.

Okay. Well. Problem stated–what do we DO?

The big thing you could do, of course, is keep bees. I’m not there yet myself, but in two years, I’ve gone from instinctive cringing away from bees to genuine delight when I see one–it may yet happen. The memory of painful stings is still strong, but it’s starting to ebb. Still, that’s a big step I’m not yet willing to take, and probably a lot of you are right there with me (or don’t have enough space to make it viable, or whatever.) But there’s gotta be a way we can still help, right?

Fortunately, yes, there’s a bunch of stuff the lay person can do, and most of it comes down to feeding the bees. We talked about planting spring ephemerals awhile back. From www.gooserockfarm.com comes the much simpler suggestion–don’t kill the dandelions! Dandelions are apparently a VERY important early source of nectar for bees, and while they’re a non-native weed, they don’t usually make the jump to invade and disrupt more pristine ecosystems, so I’m not gonna yell at you. (Bees will make honey off a lot of nasty non-natives, mind you, and that’s no reason not to take them out–but see if you can’t replace that screaming buttweed with a nice non-invasive that the bees will also enjoy.)

So apparently if you can just refrain from mowing until the dandelions have gone to seed, you can make a lot of bees happy. If you can leave the clover in the lawn, even better.

Secondly–don’t spray for bugs. Insecticides are bad for insects. Lots of insecticides are very bad for bees, and have a high residual toxicity so they keep on being bad for bees and the bee comes by to get nectar from a previously treated flower and goes home and feels very ill.

(I know, I know–you have ticks! You have to kill the ticks! Ticks are awful! Unfortunately, the common tick sprays kill bees. And ants and butterflies and spiders and crickets and many other bugs we really kinda need to get by. They tend to be a very non-specific poison, like Permethrin, which is the most common tick spray. And it does kill ticks. It also kills fish, crayfish, the above mentioned bugs, causes frog deformities, and reduces oxygen carrying blood-cells in birds. It’s pretty gnarly stuff. Them’s the breaks. They don’t make a spray that just kills ticks.)

You want to help the bees in your yard, you kinda gotta stop spraying insecticides. There’s not really a middle road on this one.  Sorry. I wish there was–I hate ticks as much or more than anybody else on earth. Believe me, I feel your pain! And also your itch, although this creme the doctor gave me is helping quite a lot.

If you can manage to do those two things, the bees will thank you. (And seriously, not mowing and not spraying–how much easier does it get?) But if you can also plant some spring ephemerals, that’s fantastic, if you can plant some good nectar plants for later in the year, that’s awesome too. Some of the very best bee plants are actually trees, like the tulip poplar and black locust. (And if you needed yet another reason to avoid those stupid Barlett pears–their flowers are huge and showy and attractive and have no nectar for bees whatsoever. It’s like putting up a restaurant and the food is made of plastic. Sheesh.)

There’s lots of online resources–a quick trip to google will turn up a lot. This is (fortunately!) a well known problem, and it’s one where people with gardens will likely make a big difference in the future. And any suggestions you guys have, please–I’m planting plants, but I’m not any kind of expert, and I’d love to hear more!