I was glancing up at the woodpecker nest this morning when I saw an unexpected sight.

Two tufted titmice were going into it. 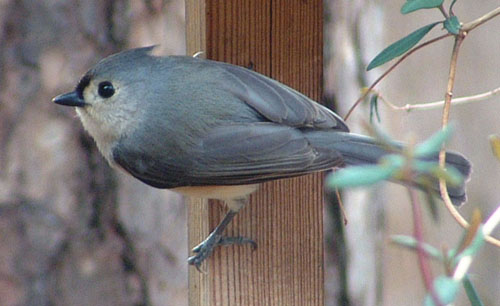 Being a truly gifted birdwatcher, I immediately realized that these were not the birds I had been watching. They’re about half the size and lack the day-glo marker heads. Also, y’know, there’s the bit with them not being woodpeckers.

One went into the nest cavity, followed by the other one. Then both emerged, sat on a branch just outside, and conversed like a pair of buyers outside a home. “Did you like it? I liked it. A few coats of paint, it’d be really nice. Wonder if the septic works…”

I was getting a little concerned at this point. Was the young woodpecker still in there? Had two grey weirdos just popped in and wandered around, moving the furniture and commenting on the decor? Was it socially awkward for everybody?

So, of course, I went to the internet to find out if I should be worried. (Most people probably look up their weird rashes, but I have priorities.)

It takes a red-bellied woodpecker 12 days to hatch and 24 days to fledge. I first noticed the woodpeckers 28 days ago. If we assume that the female had laid an egg a week and some change before I noticed them–coming and going would presumably be less marked during the egg stage, not like the frazzled two-parent bug-stuffing of later weeks–then yeah, the hatchling could have decamped sometime in the last day or two. I haven’t seen the parents in the last day or two, now that I think of it–there was some seriously frantic bug-stuffing last week, but nothing recently, and usually I’d see them at least a couple of times a day.

So either it left home or died, and if there was a dead fledgling decaying in the bottom of the nest, I kinda doubt the titmice would be moving in quite so soon.

Tufted titmice, on the other hand, are cavity nesters just like woodpeckers, but they can’t excavate a cavity. So what they’re doing is textbook titmouse behavior–they’re using the hole dug by the red-bellies to raise their own group of fledglings.  (They’re definitely moving in, too–I’ve seen them go in and out twice since starting this entry.)

Meanwhile, the bluejays are still on the nest. By my math, they’ve probably still got at least a week to go with their brood. I probably spotted them right after they moved in–woodpeckers are common around here, easily overlooked for awhile, but you really can’t miss the bluejays.

Well, since there is no way to know for sure, I choose to believe that the red-bellied woodpecker fledgling is out following its parents around demanding to be fed. (I know flickers do that, anyway.) They may be back next year–apparently they often excavate another nest right on top of or under the previous one. I’ll keep an eye out for them.