The Case of the Missing Milkweed 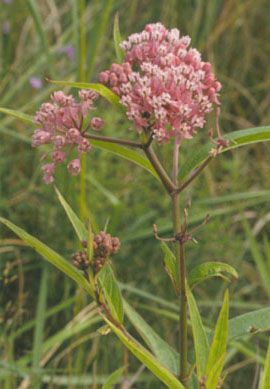 So one of the things that I’ve been really pleased with in my garden this year is my swamp milkweed. Great plant. Doing spectacularly. Had like three flowerheads last year, this year has nearly twenty. I am gardening it up garden-style. Monarch buffet time.

It was doing SO well that I went out to Niche today, to celebrate having finally finished illustrating Book 4 of Dragonbreath, to pick up two more for bare spots near the original milkweed, and also to get a “Southern Gentleman” male deciduous holly. (I have a lovely male deciduous holly. It blooms like anything. Sexy as hell, as far as other holly are concerned. It also finishes blooming about a week before my female holly blooms, thereby doing nobody any good at all.)

So I went to Niche and got my milkweed–they were nearly out, but the nice woman got two from the back for me–and…it wasn’t the same plant as in my garden.

Now, the two plants I got last year I got from Niche Gardens also, and there were two plants in one of the containers. One was (I thought) the milkweed, and the other was a much different looking plant. When I snapped the stem of the stranger, though, the sap was milky, so it was clearly SOME kind of milkweed, so I didn’t worry too much about it.

That plant was identical to the two milkweed I had just purchased.

But…if THIS was swamp milkweed…then the plant in my garden that was rockin’ so hard wasn’t.

I went home and looked at it, and as soon as I actually gave it two seconds of thought, I recognized immediately that it was Brazilian verbena.

Lovely plant, Brazilian verbena. Grows like anything. Self-seeds freely. Bees like it. Very popular ornamental. It’s also of concern on Forest Service lands because it’s turning out to be rather invasive, particularly in the South and in Texas, chokes out native vegetation, reseeds itself like anything, and the only reason it hasn’t eaten Australia is because everything else has gotten there first.

It’s easy to see what happened–Niche was one of the places selling it, the seeds got into a batch of milkweed, and I got that batch. It happens. You get oxalis among the roots of plants all the time–this was another example of hitchhiking, albeit quite dramatic hitchhiking.

I don’t blame Niche, they were operating in good faith, and it’s the only screw-up I’ve found (and I have bought a LOT of plants there.) Stuff happens. You see a lot of corrections in nursery catalogs to the effect of “If you bought this last year, you’ve probably noticed by now that you actually got species X, please contact us for refund,” so…y’know.

I poked around in the yard, and yup, there was the original milkweed, struggling valiantly along in the shadow of the Brazilian verbena.

Partly, of course, I’m an idiot. Partly I just had no reason to give it a second thought. And partly, they’re two upright plants with the same branching growth habit and red-purple flowerheads, and even though the leaves looking nothing alike,  it was similar enough that it wasn’t like I was mixing up a prickly pear cactus or a zucchini or something. Just plain bad luck.

So. Tomorrow…or perhaps this weekend…I get to go out in 90+ degree heat and rip out the intruder. And then I probably get to do it again later in the summer, and possibly again next year, depending on how well entrenched the stuff is.