The Nice Thing About Blue Jays 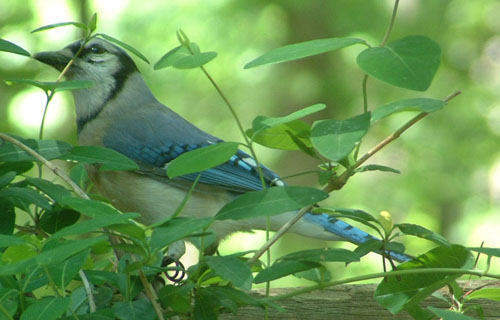 Now, I’m pleased to have blue jays period–they’re a gorgeous bird, and I’m delighted they chose to nest in a tree in our yard.

Despite their rep as bullies, they also haven’t so much as touched my feeder–whatever they’re stuffing into little fledgling throats, it’s not anything I’m providing, except perhaps the bugs of a heavily planted and un-insecticided garden.

But I’ve noticed lately that they have a great advantage as tenants, and that is that they’re paranoid as hell.

Now, my studio window overlooks the garden, and I spend a lot of time staring out into the yard. (When Kevin’s kids get to the point where they need separate bedrooms, the backyard will get landscaped and turned into a birdfeeding area in a great hurry, because the window from the room we’ll be moving our offices into will be overlooking the back instead of the front.) But despite the amount of time I spend staring out the window when I ought to be working, I still only see a tiny fraction of the birds that come through. Hawks and crows undoubtedly pass through the wooded areas all the time, and I have only caught them once or twice, by a chance glance at the right moment or a big shadow caught from the corner of my eye.

The bluejays, however, see them every single time.

And scream. And flail. And harass and mob and chase the unfortunate predator out of the area,  a winged Doberman being mauled by furious blue Pomeranians.

Thanks to our outraged nesters, I just saw a red-shouldered hawk, a first for the yard. (I started keeping a casual yard list–it’s closing in on forty species, and those are just the ones I remember.)  The hawk was blundering through the treetops, and then hunkered down on a branch, looking persecuted, while a bluejay perched a few feet away, screaming avian obscenities, then took off and divebombed his head.

The hawk went elsewhere, the jay in hot pursuit. A few minutes later, the jay returned, presumably muttering “Showed him. Hmmpff!” and went back to bug hunting. All in a day’s work for Super Jay.

I don’t touch their tree. I don’t even look at their tree when I’m outside. No sense borrowing trouble…