To Make A Prairie 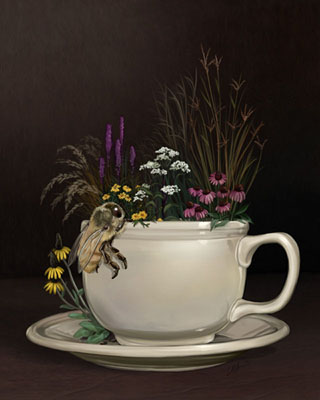 To make a prairie it takes a clover and one bee,
One clover, and a bee,
And revery.
The revery alone will do,
If bees are few.

There is undoubtedly a lot of poetical truth to this poem, which my local indy bookstore had printed on T-shirts back when I was in college, but in terms of actual factual truth, it’s sorely lacking. Making a prairie takes a lot more than a clover and a bee.  My latest madly overambitious project is a pocket prairie planting on a dry hillside about forty by eight, and most of what I’ve learned is that trying to make a prairie is an act of hubris somewhere between challenging Athena to a weaving contest and stealing fire from the gods.

I did some basic research, bought a few plants, read more, despaired, and then did a painting about it, which is my coping mechanism for most things.

Prairie In A Teacup

(Prints are available, can be ordered in a set with the Cattail Teacup)

Seriously, I don’t know how the restorationists do it. Presumably they have much larger budgets and spaces and so forth. If I had 240 square acres instead of 240 square feet, I’d probably have a better shot. Get a grant. Or maybe I could hire some earnest young grad students. Something. Still, I’ve got what I’ve got–my good intentions, a crappy dry clay hillside, a limited budget and a labor force of one.*

How bad is this hillside? Well, it’s the only place on the property that DOESN’T have a honeysuckle problem. It’s got some practically flat little grasses that have root systems approximately a centimeter deep. Get through that centimeter, and you discover the raw clay, because the developer cut this hillside in order to level the lot and didn’t lay any turf on it.

There is an oak tree at the very top of the hillside, where there is still dirt and all. There are no other trees. The die-hard maples and hickories can’t get a foothold. The only reason you would plant a tree on this hillside is if it had humiliated you in some fashion and you wanted to teach it a lesson.

I planted lantana on this hillside–lantana, my go-to plant for hot dry spaces, my weapon of last resort, my plant that will grow ANYWHERE. It did not grow an inch in any direction, and expired gratefully in winter. (Meanwhile, its brother ate six square feet of yard.)

I could terrace the hillside and bring in dirt, but that won’t fix the problem–it’d still be clay underneath. What this hillside needs aresod-busters, plants that break up clay and turn it into dirt, the next stage of ecological succession. Tough grasses, with roots that don’t take no for an answer.

What it needs, in short, is a prairie.

It turns out, there WAS a prairie in the Piedmont, long ’bout the time the Europeans arrived. Go figure. It was an ecological creation of the indigenous people, who used fire to create pocket prairies, and hence better hunting and whatnot (edges tend to be much more fertile than deep forests.) Today it survives in miniscule segments, most of them on power-line cut-throughs and old railroads, and we have a pine forest in its place.

So there’s precedent for what I’m doing. And people have done it before. But it’s still kinda crazy.

For one thing, there’s diversity. There were 277 species in the Piedmont prairie. I’ve managed to find ten, and I’m fudging a bit counting annual sunflowers among that number. Four grasses, a native goldenrod, and a couple of flowers. Those ten are currently dotted across a small section the hillside, looking less like a miniature prairie and more like a science project the day after the fair. (The switchgrass forms a clump up to ten feet tall. There is currently one blade that is more than three inches high. I know–I know–that its root is likely a foot or more long, punched through the heaviest of red clay, because that is what switchgrass does. That is why I planted it. It can get a root seven feet long before it bothers to grow an inch. This is not particularly gratifying when the zinnia starts, purchased as seeds for $1.43 a packet, are almost as tall.)

I can’t even find a decent plant list for the Piedmont prairie. The easily available stuff on the internet listed a couple of common plants (one of which I even located!) and then went off into the endangered stuff, which I don’t think I’m going to run into any time soon, and wouldn’t plant if I could, what with the terror and all.I’ve tried contacting a conservation group locally that’s supposed to work on restoring these, but haven’t heard back yet.)

Possibly what I need is more revery, but no matter how much I rev, it doesn’t seem to accomplish anything. The bee is on the blueberry bush and not at all interested in what’s going on on the other side of the yard.

I’ve made over a dozen deer ticks briefly happy and then very very sad, though. So, um, I guess that’s something.

I have located a mail-order place that sells some of the grasses in flats at prices that choke me to contemplate. And the labor involved (4 flat minimum order, 18 cels to a flat, translates to HOW MUCH time with the trowel and, when the clay gets egregious, the little hand-pickaxe?) chokes me even farther. Nevertheless, I suspect I may wind up putting in an order in the next month or so, because by god…go big or go home. Money where mouth is. I want to plant for wildlife, I will plant…if not a prairie, exactly, then a native grass planting that can pass for one in poor light.

And Emily Dickensen can kiss my revery, or perhaps my bee.

*Plus occasionally Kevin, for things like “Can you mow this?” and “Can you show me how to use the bow saw without killing myself?” and “I believe we will require fire for this bit.”