Stuff In My Yard: Witch Alder 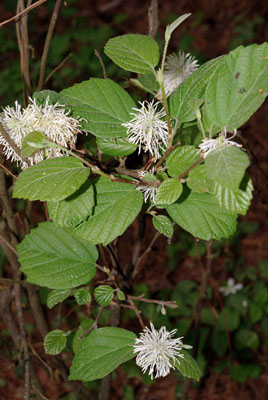 This photo will never win any prizes for composition.

The Fothergillas were named after John Fothergill, an English botanist and physician, whose great contribution to medicine was a pamphlet entitled Account of the Sore Throat attended with Ulcers which is certainly descriptive. (It was also the first English account of diptheria, and probably saved a lot of lives.) He was a Quaker and had an extensive botanical garden of rare plants.

The other thing named after him is “Fothergill’s sign” which–to quote Wikipedia–“If a mass in the abdominal wall does not cross midline and does not change with flexion of the rectus muscles, this is a positive sign for a rectus sheath hematoma.”

I have no idea what any of that means, but y’know, I’m glad a plant got named after him too, because who wants to go down in history attached to a rectus sheath hematoma?

As a plant, sadly, this one has been pretty mediocre for me. (Sorry, Mr. Fothergill. But I’m still grateful for my lack of diptheria!) It ‘s a shrub, it didn’t die, but it hasn’t grown significantly in two years, and only about half the plant is still putting out flowers, probably from deer depredation on the other stems. It’s suckering, but very very slowly. Part of this is probably location–it’s a part-shade-to-full-sun plant and I’m getting the impression it really prefers full sun. So it’s alive but not exceptional in my garden.

In full sun, the fall color is supposed to be truly extraordinary and well worth seeing. On my plant, it’s sort of vague brown. I may wind up moving mine at some point, just to see if it likes life better somewhere else.

Mt. Airy, the name of this particular cultivar, is a town in North Carolina near Pilot Mountain, which I mention because so help me, I have never seen a geological feature that looks more like a boob. Seriously, the first time I drove by it headed north I giggled like a twelve-year-old the entire time it was in view. You have to approach from the right angle, but…dude.